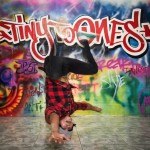 I was going to write a blog about Tiny Toones – but when I asked Lisa Ho, the organiser, for some more information she gave me such an insightful response that I’m just going to tell you exactly what she told me. It’s pretty inspiring, and really shows you the passion that is behind getting KK and the Tiny Toones crew here. Do your bit, and help get them here by pledging or sharing their link on. Now, over to Lisa: Dec 2008, I backpacked through Asia to Cambodia to explore the country my mother fled about 30 years ago after surviving the Khmer Rouge genocide.

While I was there, I discovered Tiny Toones NGO – an organisation that uses hip hop arts, particularly breakdancing to reach out to street kids. It was founded by a man named KK who was born in the thai refugee camps, and then his family migrated to Long Beach California. As a kid, he was champion breakdancer until he joined the Crips gang which then led him to 8 years in and out of prison. In 2004, KK along with other Cambodian were handcuffed, put on a plane and basically dumped on Cambodian soil without a choice. KK then found work at a drug and rehab centre and one day as he was on outreach, a group of kids approached him for breakdancing lessons. At first he refused, but they kept asking him day after day and eventually fearing that the kids might otherwise repeat his own mistakes, KK started to teach out of his living room every night after work. 9 kids grew to 50, then they had to move out to a new facility and when I got there, there were about 500 kids learning at the centre each month learning Cambodian, English, computer skills, breakdancing, music production, rapping, DJing, art and HIV education.

I was stoked when I saw a glimpse of hip hop in Cambodia – it was raw, it was grassroots and it was creating social change. So, instead of returning home after 2 weeks, I ended up changing my plane ticket and didn’t come back to NZ until a year later. I worked as the Administrative Director alongside KK and toured with the performance crew across 5 cities in the US.

To stay back for a whole year was the most insane thing that I’ve ever done but I loved every second of it because majority of the kids that go to Tiny Toones come from broken dysfunction families who are steeped in extreme poverty, drug addiction, sex trade, and would rather their kids go beg in the streets or shine shoes at the market rather than go to school because to them, there is no value of education or they simply cannot afford it. Seeing these kids everyday walk into a safe haven, into a place where they were learning and growing and kept off the streets- that was priceless.

I came back to NZ in Dec 2009 but have been back to Cambodia with my family twice since. Last year, Tiny Toones began planning a trip to Australia and I thought since they were coming to our side of the world, might as well come to NZ too. Initally we tried to tag onto the back of the Australia tour but unfortunately it didn’t quite work out that way. In January they performed in Melbourne and all 5 shows sold out so we’re really looking forward to bringing the crew- Cambodia’s first generation of hip hop artists to NZ for the first time ever!

Tiny Toones crew of 8 breakdancers, 3 rapper and its founder/director KK will be here for 10 days. They will tour about 8 high schools throughout Auckland, doing presentations and conducting after school dance workshops. They will jam and connect with local dance crews and hip hop artists as well as share their success stories at a community dialogue evening bringing together youth/social workers, students and professional artists.

On 27th April, the crew will perform their very own choreographed show at Auckland Girls Grammar called Live. Dream. Create. This fundraising show will showcase their true-life stories of growing up in a post-genocide nation, with drug and alcohol abuse, exploitation, violence, shattered dreams and hope for a better future. It’s a combination of dance, music and theatre. All proceeds from ticket and merchandise sales will go directly back to Cambodia to help fund Tiny Toones NGO creative, education and outreach programmes.

How awesome would it be to be able to pull this off, and be able to share with our local youth that where you come from does not have to determine your future. No matter how rough it gets, they can be greater than their circumstances and rise above their daily struggles.