We love it when our creators get creative, and quirky. Here’s just a few (there are many more) examples of quirky rewards on some of our projects.

To celebrate raising $7000 for their film Hold Your Breath, Candlelit Pictures posted this pic of the team in their panda onesies along with a big THANK YOU to all their pledgers. We love this because it’s not a generic thank you. The expression on Alix’s face (right) says it all. 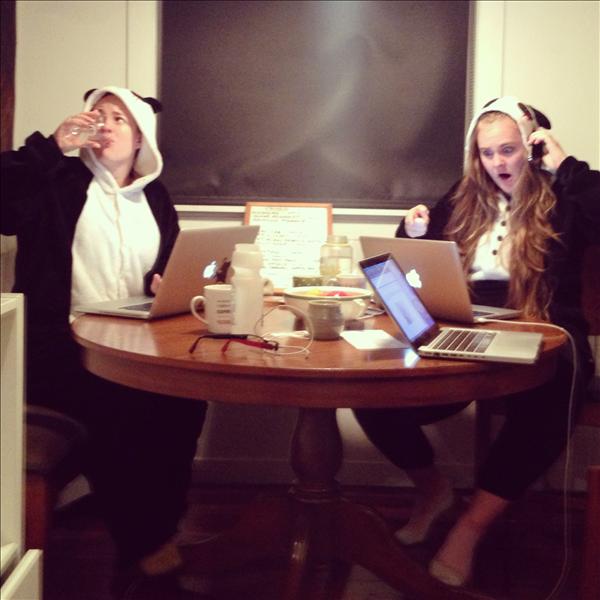 2. Create a Religion Dedicated To Your Pledgers

Mangle and Gruff took rewards to the next level when they promised to create a religion dedicated to anyone who pledged $1000 to help the band record a new EP. And someone did that. We’re still not sure if the band has worshipped in front of the pledgers house yet though…

3. Promise To Shave Off Your Beard

When Milarky needed to raise $5,000 to refill his graffiti stocks after painting a shark mural in Wellington central, he promised to shave off his fully vegetarian-fueled beard if he met his goal. Now Milarky is a big beardless PledgeMe success story.

To raise the money needed to build a measurement tower for their wind turbine planning, Blueskin Energy went out to their crowd of Blueskin Bay residents to source rewards for their campaign. They had everything from artwork to blues lessons offered back to them, and even one resident who offered to “homekill” chickens for each $15 pledge.

5. Everyone Loves A Good Pun

Who doesn’t love a good pun? The Christchurch Art Gallery used lots of bull puns in the copy on their project, Back the Bull, which aimed to buy back Michael Parekowhai’s bull sculptures. “Bull-iever” “Unbullievable” “Unbelieveabull” “Unstoppabull” certainly livened up their copy.

Not only did Liz Kirkman ask her crowd to send her to Perugia, Italy to work with vocal experts, but she asked her crowd to help her decide what to wear. Liz posted her costume ideas to Facebook, and her crowd could vote for the costume they thought was best. When James Shaw needed to raise the money to get himself to Al Gore’s Climate Reality Leadership Programme, he promised to travel from New Zealand to Chicago in a panda onesie, if he got a big $500 pledge. Any reward involving panda onesies is alright with us.

[…] We know that you’re paying for it, but some of the rewards on PledgeMe projects are simply priceless. From personal live band performances to becoming a beekeeper for half a day, we’ve seen it all. How about buying someone’s surname or a lap dance? Check out even more quirky past rewards here. […]