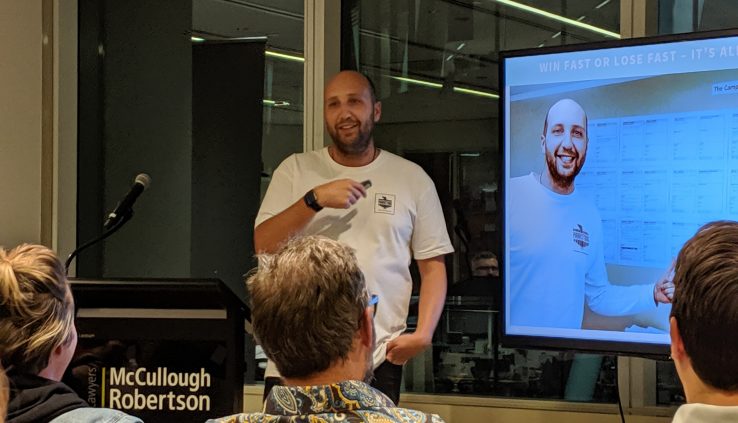 There’s a lot about business that you can learn about from the craft beer crowd — quirky marketing, sleek branding, collaborations around a mutual passion, and equity crowdfunding for growth.

Kiwi icons Parrotdog are known for all of the above, but especially equity crowdfunding. In 2016 they set records when they raised $2million in 2 daysthrough our platform, PledgeMe, to fund their new brewery. The following year they raised an additional $1million from their crowd for their next stages of growth.

Last week, we hosted Parrotdog co-founder, Matt Stevens, in Brisbane to share how they scaled their business from three Matts brewing in their flat to a commercial success. With a background in accounting, and a passion for beer, Matt shared their decision-making process that led them to equity crowdfunding, and the process they took to deliver their successful campaigns.

Here was what he shared:

He started with the story of how Parrotdog started — as a few friends brewing in their flat in 2011, and they secured their first lease for a brewery in 2012. They grew organically until 2015, with bunch of highlights along the journey.

In 2016 they hit breaking point — they knew they needed investment to grow, and improve their production. They had a plan, and needed to decide if they “wanted a Big Daddy investor, or a crowd who’d drink beer with us?”. They decided to go with their crowd and assessed the possible platforms to work with. They decided to come with us because we didn’t force them to change who they were in their goal to raise investment. And we happened to have an office across the road from their brewery, and loved their beer!

Once they decided to hit go, they focussed heavily on their preparation — they wanted to win fast or lose fast. Matt even had a full day by day plan on his wall in the crowded Parrotdog office.

They had four guiding principles that made their campaign a smashing success:

They did this by creating the pitch video many of you have seen. They made a splash by being themselves.

They had a planned process which started with a newsletter for interested investors that grew from 800 to 4,000 pre-campaign launch. They sent out regular digests with information to build the anticipation from their crowd. They started with announcing their site, and made sure to provide their full offer document one week before the campaign launched. They also got a bit of mainstream media coverage.

They knew they couldn’t just have fun with their crowd, they had to show they knew what they were doing. They spent a lot of time not just writing but designing up their information memorandum, and also hosted an investment evening. Matt passed around copies of their printed information memorandum, which our lawyer Ben got very excited about…

While this isn’t something I’d normally recommend to plan for, they knew they wanted to go live and be done as quickly as possible. They hit their minimum goal of $1.2million in 12 hours, and $2million in two days.

From there, Matt shared their story after — from starting the build of their new brewery, to welcoming 796 shareholders into the fold, to launching a second round of investment the following year when new opportunities presented themselves.

The thing that really struck me throughout the presentation was how their crowd became central to their new space — with handles behind the bar for those that pledged over $2,000, to the regular shareholder gazettes that offered deals and discounts to their owners.

Matt also covered how they handle their share registry and share trading now that they have over 1,100 shareholders with some thoughts on how Australia could follow suit.

Thanks to everyone who came out on a rainy Thursday night to listen to Matt speak, with the support of Ben Woods, partner at McCullough Robertson, and Lisa Cavallaro from Brisbane Marketing.

Super big shout out to the brewers that brought some tasty beers for us to try (Archer, Currumbin Valley and Black Hops). They were super delicious.

And, if you’re looking for a craft brewery to invest in RIGHT NOW, the team at Behemoth have a campaign closing tomorrow night (Friday 5 July). They’ve already raised over the minimum goal of $1.5million across their general and wholesale crowdfunding campaigns. Check it out here: https://pledgeme.co.nz/investments/360

[…] July this year, PledgeMe hosted Parrotdog in Brisbane at a brewers event. They explained how they raised $2 million in two days during their […]

[…] valuable to share with a lot of people who are interested in it. You could participate in webinars, events, or share your crowdfunding story in other […]