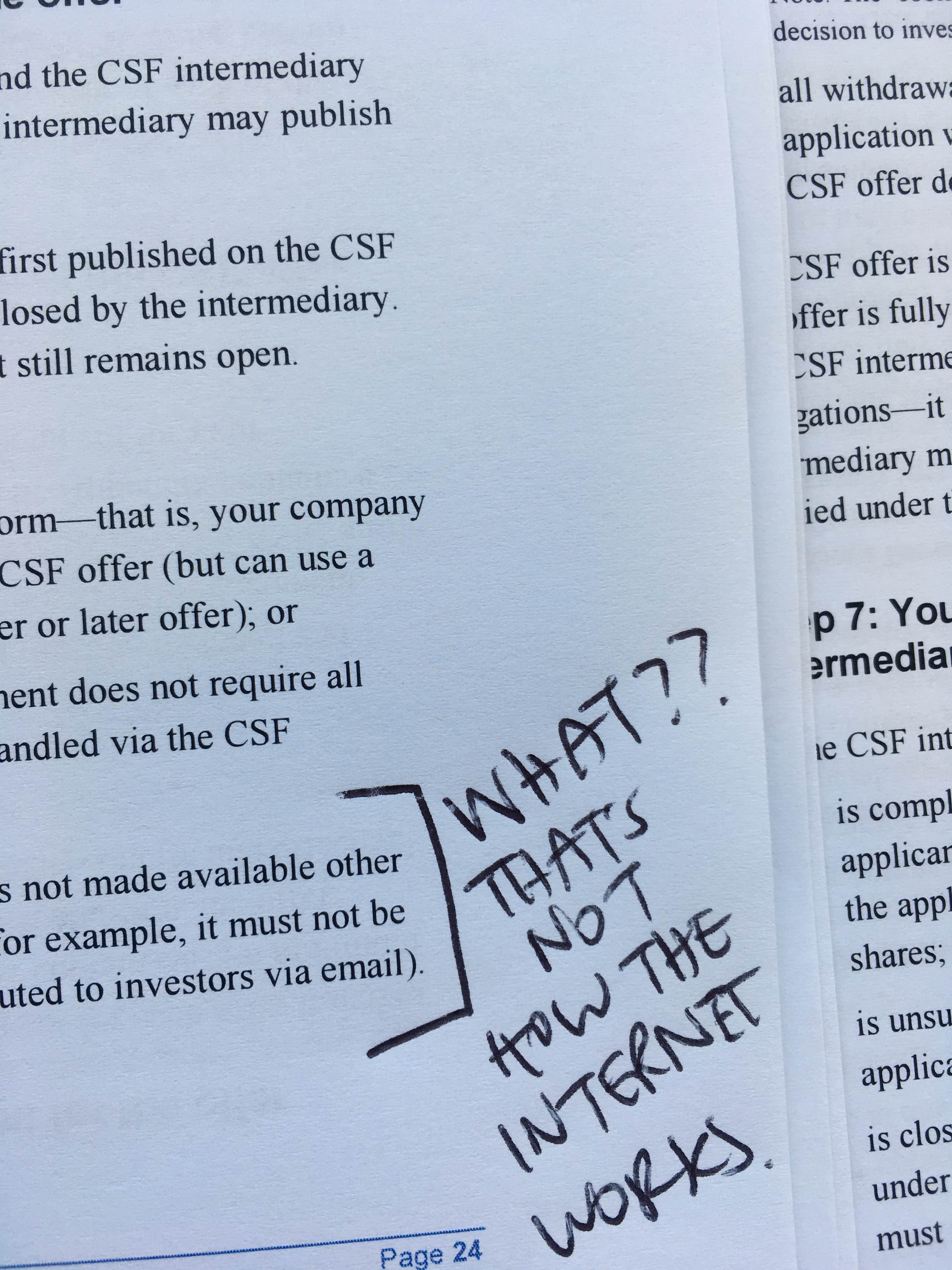 Posted By Anna
What it means to equity crowdfund in Australia

We’ve seen a whole range of companies raise money through PledgeMe, from tech startups to craft beer companies like Parrotdog raising $2million in two days. It’s a powerful way for companies to bring their friends, family and fans in to help them grow and to engage beyond rewards-based crowdfunding.

In Australia, the Corporations Amendment (Crowd-sourced Funding) Act 2017 introduced the regulatory regime for this type of funding on 29 September 2017 which allows equity crowdfunding (or crowdsourced equity finance as your government-y folk like to call it). There’s been a lot of excitement, but not a lot of clarity on what that actually means for companies. So, we’ve decided to change that!

1) You have to go through a platform

If you want to raise money through the CSF legislation, you need to go through a licensed platform. There are currently nine licenced platforms in Australia, and we are one of them.

2) You need to be an Australian company

In order to equity crowdfund, you need to be an Australian company.

There are two caps you need to know: an investment cap of $10,000 for the general public (Sophisticated Investors can pledge more) and a $5million total cap on how much your company can raise per year.

Honestly, truly, equity crowdfunding isn’t a silver bullet. You have to do all the work to prepare your offer document, and have a company that your crowd is prepared to invest in for the long haul.

But, it has a lot more benefits than some traditional finance options. We truly believe it brings so much more than just funding though. It lets you bring in your crowd of family, friends, and fans. Your customers can not only love your product, but own you – and sell what you do because they are a part of your journey.

Here are the three key ingredients to a successful equity campaign: 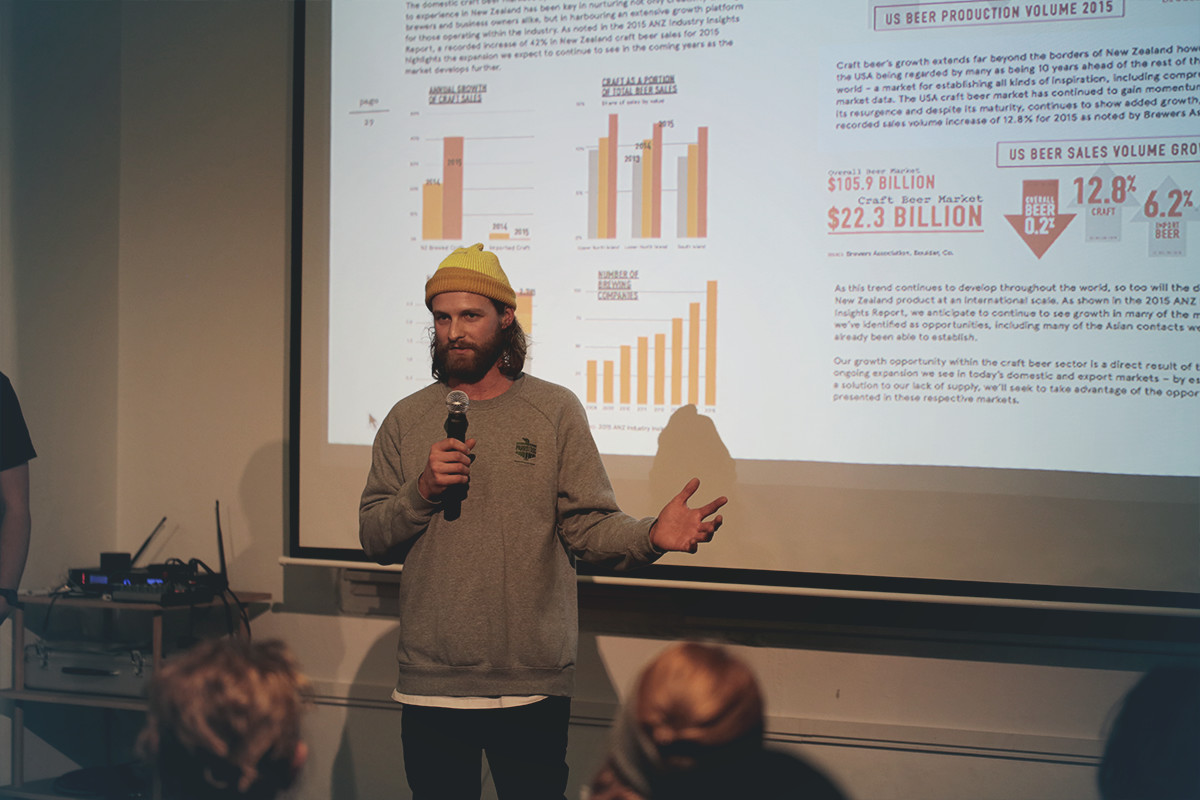 Parrotdog had a brewery set up in Wellington, but had hit capacity in their central city space. They knew if they built a new brewery they could triple production once it was launched. They also knew they had demand for their product that they couldn’t meet, so they went out to their crowd to help them fund the set-up their new Lyall Bay brewery. They raised their maximum goal of $2million in two days from a crowd of avid beer drinkers and supporters. Their crowd got a 10% discount for life, and are now out there promoting their beer because they own it.

In their latest round, the Parrotdog crew had some comprehensive growth plans, but needed additional capital to hit go. You can check out their full plan here, and they’re currently raising through the New Zealand public. 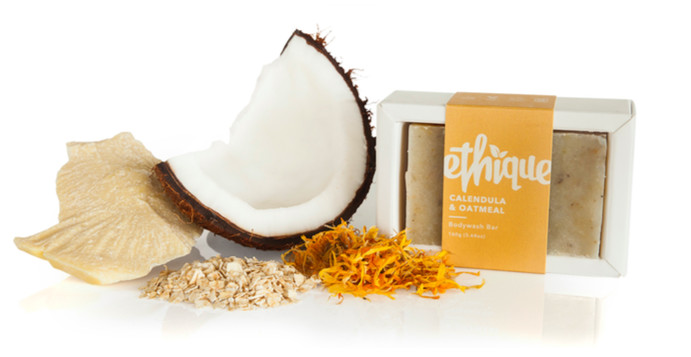 When Brianne from Ethique wanted to raise money through equity crowdfunding campaign, she went out to her customer base. Her customers love the ethos of her solid hair care business, because her main focus is to reduce waste. In the last few years, their company has stopped over 200,000 bottles from going to landfill.

In her first round, she raised $200,000 in two weeks, and 80% of her investors were current customers. 3 of them were chemists, and when she had trouble doubling her batching in her new factory one of those shareholders came in and helped her solve that problem in like ten minutes.

In her second equity crowdfunding round over 1,200 of her customers registered their interest in investing before launch, and it took 90 minutes for the campaign to meet it’s goal of $500,000 once it went to the public. 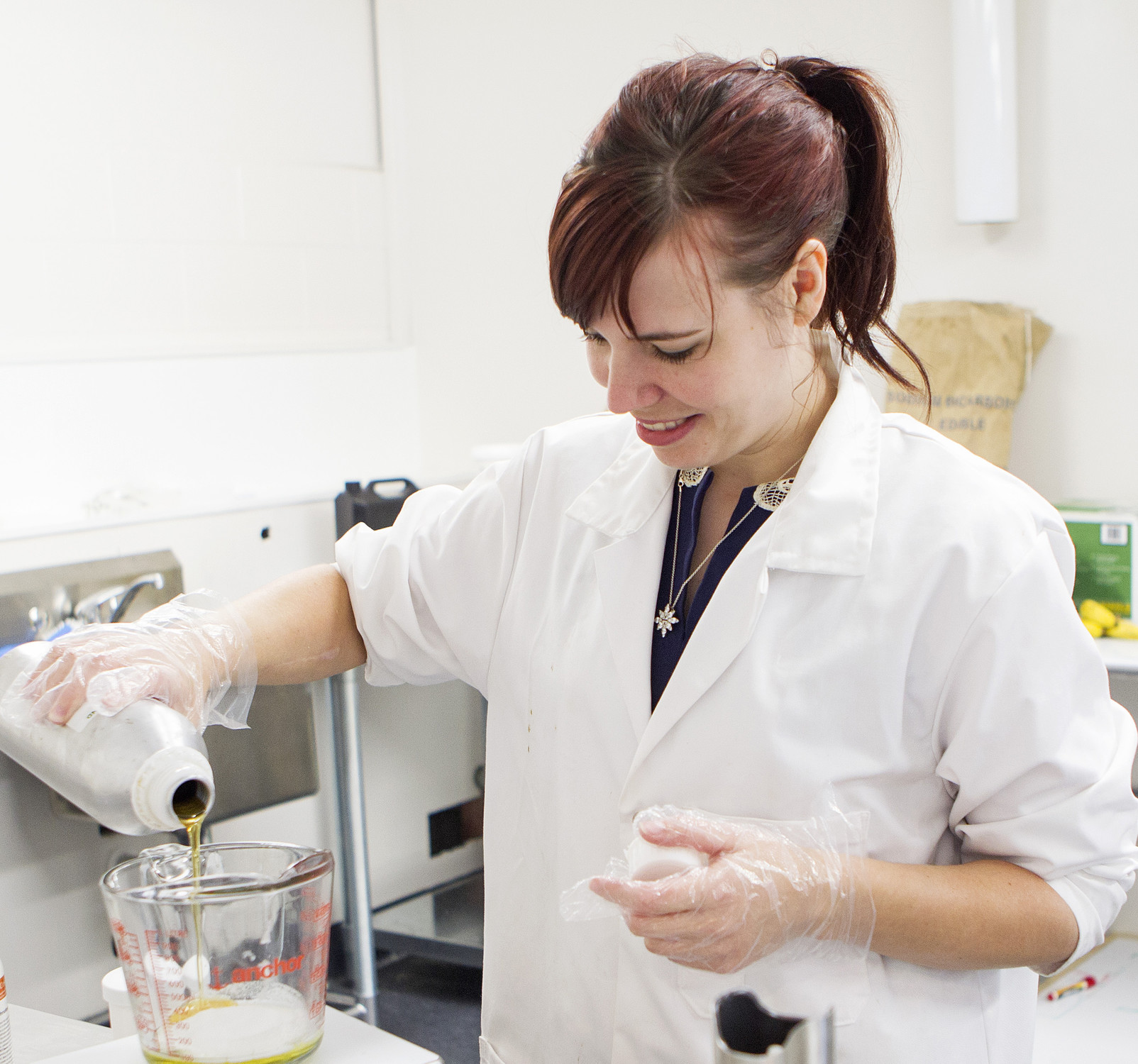 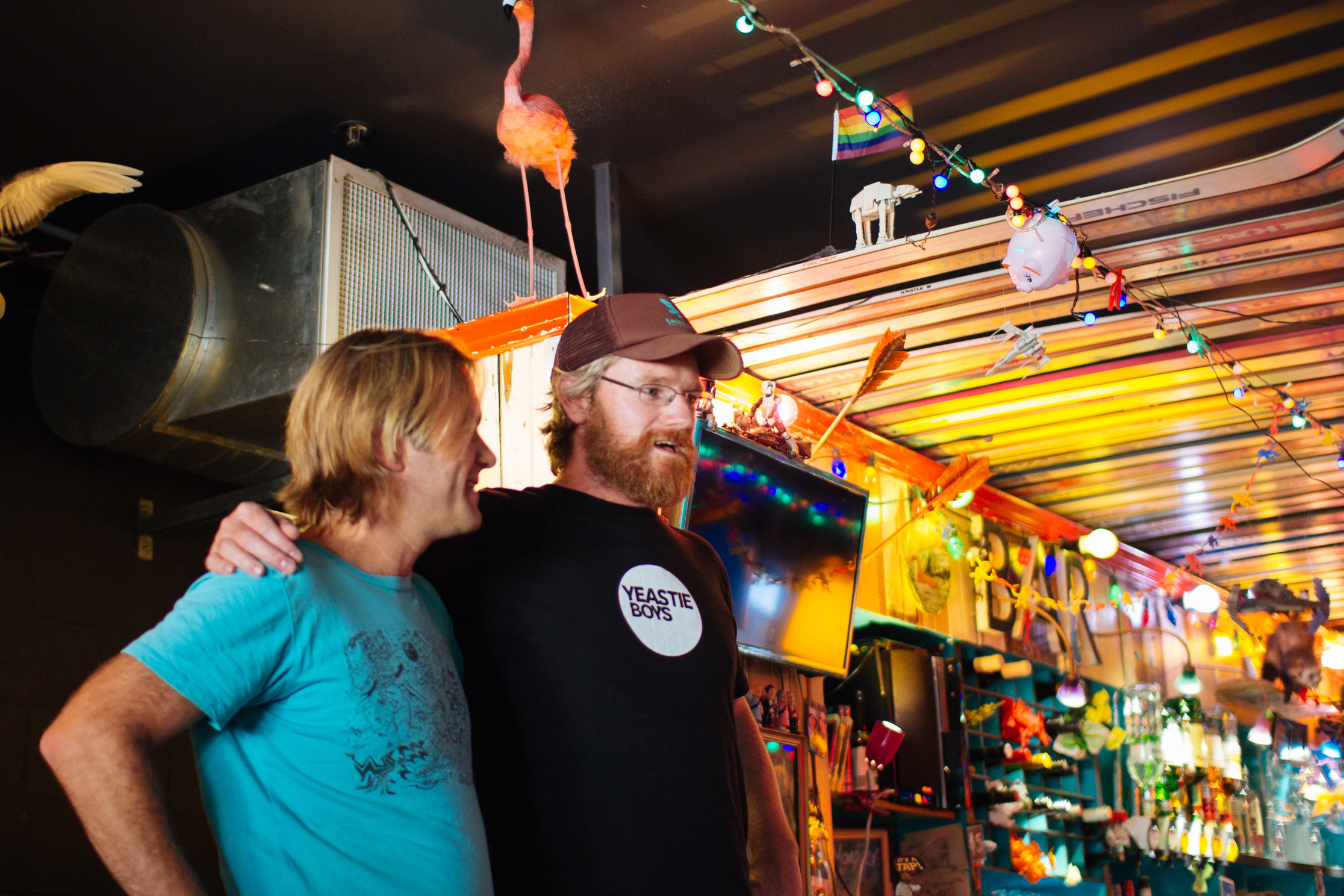 Yeastie Boys famously told us that email was dead, and that they were going to do everything over Twitter.

Thankfully, we managed to talk them into setting up an interested investor newsletter, and they went out asking for their crowd to be part of their “back-up band”. They got their crowd to provide their names, emails and reward ideas for shareholders in addition to part ownership of the company. They got perk ideas ranging from shareholder branded beer, to home brewing sessions with the founders, to Stu’s pants (he wears pretty fantastic pants). In the end, they decided to offer all shareholders a discount, and investors over $2,000 the option to homebrew with the boys after the AGM. Only 200 of their interested investors got in before their campaign met its maximum goal of half a million dollars in half an hour. 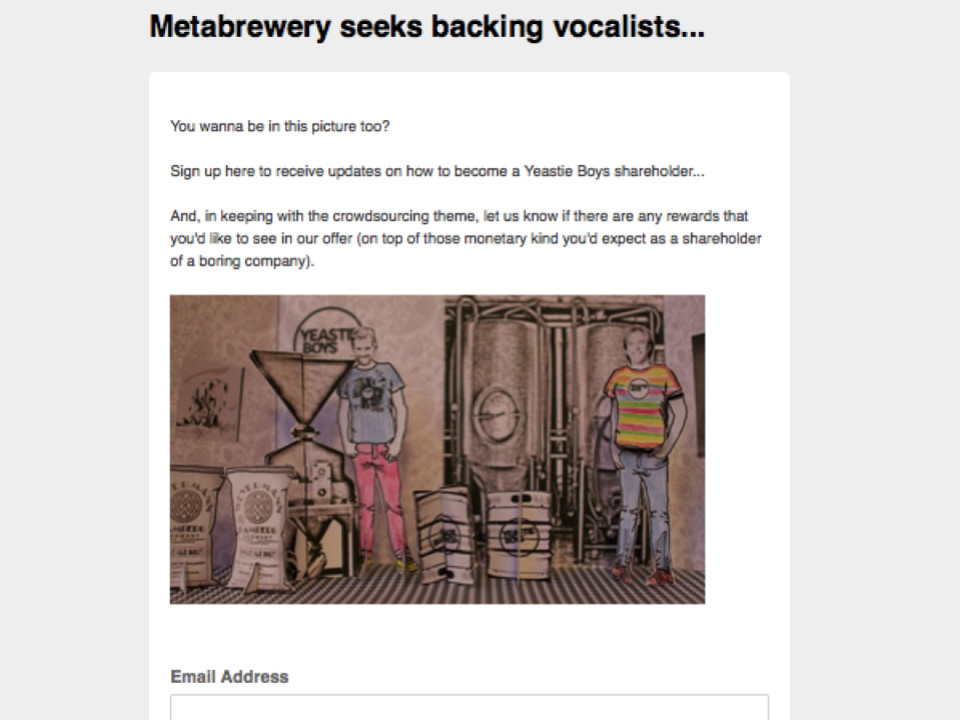 4) Things to think about after you raise

If you’re thinking about raising money in this way, you need to be clear on what this will mean for your company after!

If you’re interested in equity crowdfunding, get in touch with us to discuss your options.