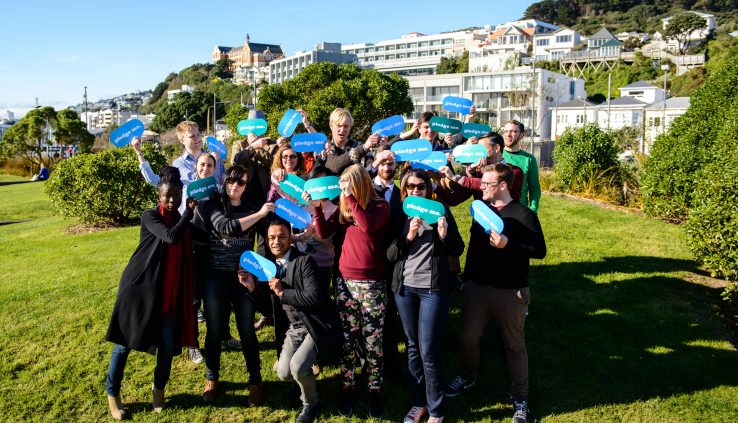 One of the biggest things that we’ve learnt over years is that the most important part of any crowdfunding campaign is your crowd. The crowd you already know, whether it’s your mum, your co-worker, or your customers. Do they want to support you? Do they know your campaign is happening? Do they feel valued? All important things to take into account before launching a campaign, but sadly not always prioritised. You can build the shiniest campaign in the entire world, but if your crowd doesn’t know it’s coming, and don’t feel like they’re being valued, they won’t get on board.

So here’s our five-step guide to checking that your crowd wants to fund you.

Write down the names of people in your crowd that have supported you in the past, or have been watching you work on the thing you want to fund. The longer you’ve been working on the thing you plan to fund, the easier it often is. If you’ve been working on it for a while, and your crowd has been watching, they’re more likely to believe you’ll be able to fulfil the project you need funding for (and will know the hard yards you’ve put in to get to this point).

For example, if you’re a filmmaker looking to fund your next film, your crowd would probably look something like this:

Yep, it’s seriously that easy. We recommend asking at least 50 people what they think about your campaign. Not everyone will be on board, and some people will just say what they think you want to hear, but these conversations can help you decide whether you should crowdfund or not. Here are some questions you could ask:

Also, some people will always say yes to please you. Don’t ask them.

These days, most people are on social media, so it can be a good way to gauge interest in a possible crowdfunding campaign. We suggest posting a video of yourself chatting about your possible crowdfunding campaign across your social media channels (what you’re planning on doing, how much you’d like to raise and what you’d use the funds for) and asking people to comment below if they’d pledge to it.

A video will grab people’s attention more and get you used to putting yourself out there (which you will need to do while crowdfunding). Asking them to comment will create more accountability and forms a neat list of people you can reach out to directly once your campaign launches. Comments also create more engagement, causing social media algorithms to push your post up in the feed and reach a wider audience. Finally, if people comment, then you will know that they’ve listened to what you’ve said properly and will be more likely to follow up with supporting you.

Social posts are great, but surveys are even better. It takes extra effort for people to fill out a short survey (as opposed to liking or commenting on a social media post), which indicates that those who do would probably also put in the extra effort to make a pledge. Here are some free tools you can use to create a survey:

Keep your survey as straightforward as possible. Explain your project and then ask the following questions:

The questions above should give you a basic idea of whether your crowd would support your campaign or not. It also gives you a list of people to email/text directly once your campaign is published.

How can I tell how much will be pledged?

If you want to know more about how much they would pledge, list out the rewards you plan on having with the pledge amounts as a multi-choice question (“Which of these rewards would you pledge for?”). This is recommended for project campaigns aiming to raise over $5000 or more, and for equity generally. For example, if you’re a brewery raising money through a project crowdfunding campaign to open a new brewpub, like the Three Sisters Brewery, you could come up with some relevant rewards you’d offer and ask your crowd about it. For example:

“Which of the following rewards would you pledge for if you had to choose?

Here’s what an equity crowdfunding example looks like from How Now’s campaign. You will need to adjust it to your campaign (context, whether it’s project/equity crowdfunding, what you’re raising money for). The idea is to create a short list with a range of Pledge amounts, to give your pledgers a choice. This will also give you a good indication of how much you can expect to raise. Based on the outcome, you can set that amount as a minimum target, or perhaps a little higher depending on your needs. If the outcome is nowhere near what you need it to be, then you know you need to spend more time building out your crowd before you launch.

Involve your crowd in the whole journey, including your campaign prep. Get feedback on your content. Ask for ideas on rewards (or, better yet, some of the rewards that you can offer!). This doesn’t have to be everyone you’ve reached out to, and you might not ask for the same support from each of them, but we do think that in crowdfunding the old adage of “if you ask for money, you get advice and if you ask for advice, you get money” is dead. We find that if you ask for advice, you’ll often get both. Here’s an example from the Yeastie Boys equity crowdfunding campaign, where they asked their crowd what rewards they’d like to see. Once you’ve established that enough people will pledge to your campaign and you’ve decided that you’re definitely going ahead, create an email list from your survey.

You can use this list to create some excitement for your campaign if you have a specific launch date and time. Examples of emails you could send out are:

Once your campaign is live and you’ve sent out the first email/text letting your crowd know, we then suggest using the ‘Campaign updates’ tool on your campaign page to send out updates from then on. These will go out to the people who have pledged and are publicly visible on the page too. If you use both the updates tool and your original email list during your campaign, you run the risk of spamming people.

If your crowd gets on board, you’re so much more likely to get people you don’t know on board. They’ll see the validation of your crowd, feel comfort by being shoulder-to-shoulder with your existing supporters and emulate them. Sort of like in Derek’s TED talk on how to start a movement. Make sure you specifically ask them to pledge. Likes and shares help too, but at the end of the day, it’s funding you need.

Here are some other resources which you might find useful when considering crowdfunding:

We are going to open a cat adoption cafe in the Wellington area this year. Perhaps you have heard of cat cafes? They are very popular overseas and there are even two already in Auckland. The cats live at the cafe and people book time to spend with them; coffee and food are available too. In our concept, people can also adopt a cat they love. We have started a Facebook page and our posts have reached about 1000 so far. Our website is almost ready to go live. We are working with a design team in some premises in Lower Hutt. We have saved money for many years to do this but would also like to try crowd funding. I think that we may have a problem, though. Since we just moved to New Zealand in May and Wellington in August, we do not have a very big crowd here yet.

[…] Ask them! Send out a survey to your customers through your social media channels, in your newsletter, or at your store’s location to gauge their interest.  […]

[…] junk mail tells us, people won’t bite just because something’s being thrust in front of them. Find out if your crowd will support your crowdfunding campaign […]