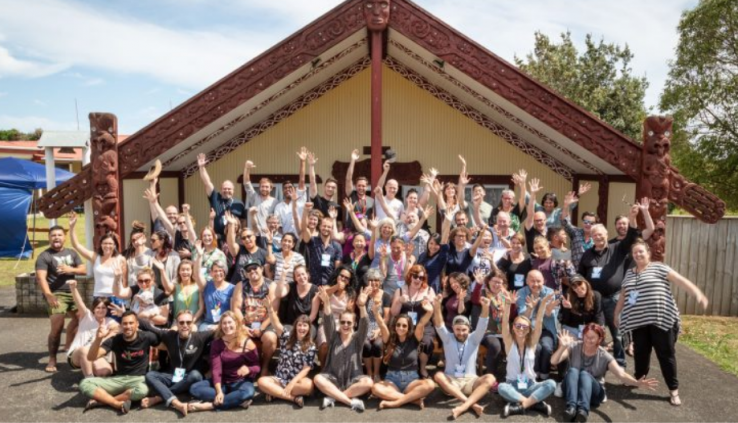 One of the biggest aspects of self identifying as a social enterprise is being clear on the positive impact you want to make through the course of doing business. You need a sustainable model with impact baked into the core of what you do. And you can’t just state what that impact is, you need to show that you’re checking in on that impact and measuring it.

For some organisations, it’s easier.

Take Ethique for example, a company that creates solid shampoo bars. They know that for every bar sold, they stop 2-3 bottles from going to landfill. Not only can they measure their positive environmental impact with every bar sold, but they can put some big and clear goals out into the world.

A few years ago, Brianne West (the Founder) decided Ethique would stop 1 million bottles from going to landfill by 2020. I asked her once about the difficulty of setting that goal, thinking that she may have had pushback from her team and her board. However, nobody questioned it. The simplicity of the goal, and the ability to measure it, was catchy. And to date, they’ve already stopped 6 million bottles, and that was announced before 2020 ended.

For some of us, our impact can be a bit harder to set and measure.

Here in the PledgeMe office, we’ve been self-identifying as a social enterprise from the very start. In my thesis on crowdfunding in 2012, I stated:

There is a growing push from the United States for a fourth business model (or fourth sector) called For-Benefit enterprise (Sabeti, 2011). This model is driven by social entrepreneurs who want to balance the importance of healthy balance sheets while simultaneously providing social benefits…. [PledgeMe’s] performance measures will equally weight social and financial outcomes.

To start, just measuring the money going to campaigners felt like measurement enough. But as our understanding grew of how difficult it was for certain groups to access funding, it indicated we needed to be a bit more nuanced. Nuance happens as you grow up, right?

We started off by acknowledging that equity crowdfunding wasn’t inherently equitable, specifically for Māori in Aotearoa, New Zealand. Then we made the statement that we wanted to make it equitable, and talked about some of the disparities we see in funding for female founders, regional founders and Māori.

Where my thinking began

My personal experiences as a female founder originally from the regions (Dunedin, even if I don’t sound like it) made me resonate with the struggles that both of those groups faced accessing funds. But we shouldn’t just fix inequities that we face, we should fix the system for everyone.

Co-starting the WWGSD event really made me think deeply about events representing the countries in which they’re set. There were a lot of discussions around how we could include diverse perspectives in an event that focussed just on women and, with the prompting of the group, we decided to focus on measuring and reflecting the ethnic representation at the event.

I remember one attendee calling me in about the lack of Pasifika representation at our first event (calling in rather than out, because she did it privately). She asked where all the other Pasifika sisters were at, and we realised that only 2% of the attendees identified as Pasifika compared to 7% in New Zealand. She offered to help activate her crowd to attend the event in future. That meant that, in the events that followed, we did increase representation.

Because diversity of representation was an important impact goal, we set goals and tracked them, which meant we were aiming for something, and could report back transparently on success or lessons learned. It also helped us tell our wider community that representation really mattered to us, and we were taking proactive steps.  We also provided accessibility information, free childcare, and scholarships to increase accessibility across a spectrum of intersections of identity.

How it moved to PledgeMe

My experience with WWGSD informed my thinking around PledgeMe’s impact, moving towards a belief that the funding through our platform should go to companies that represent Aotearoa across a spectrum of identities — ethnic, gender, regional, and more.

Earlier in the year, I tried to flesh out what this could look like from an impact measurement framework perspective. From my experience with WWGSD, I believed we needed to share a goal publicly so we could get support and buy-in to improve things, but also so we could stay focussed to our kaupapa. I truly believe by setting, measuring and sharing our goals we can find more companies that buy into building a better future together.

But it was hard.

I got pushback from all sides, both when we didn’t have enough detail, and then when some felt we had too much. What would happen if we didn’t hit our goals? Should income be prioritised over impact? Could we just make bank now, and make impact later?

It’s not as easy as that. Life is never as simple as a short list of measurable and clearly prioritised goals.

Our impact and financials are interrelated. By supporting founders that may have struggled historically to access funds, we are providing an avenue that could work for them – and they could be more successful with us than those that could access funding elsewhere because they’ve had to focus on their crowds from the start. At least, that’s what we’ve seen. Almost all of our biggest campaigns identified as regional, indigenous or women led.

As our PledgeMe values state, we need to do well and do good at the same time; we can’t separate those things out as recent business history might suggest we should.

Our world is interrelated and nuanced. Pretending it isn’t is why we’ve seen the rise of some pretty negative externalities of enterprise. Thinking you can do well and just focus on money now, and do good later, is part of the reason we’ve seen the rise in:

Baking your impact into your revenue model can be harder, but it’s important if we want to have a planet that works for everyone.

What happens if you don’t hit your goals?

It’s true, sometimes we might not hit our goals. You can never know what will happen, especially in untested waters. No progressive social change ever happened by setting goals that were clearly achievable. But you need to set the point on the map where you’d like to go, even if you’re not 100% sure how you’re going to get there yet.

What you learn along the way could make your plans or company better. Those lessons could be shared publicly to help inform others. We should be able to share our lessons and work together, because if we solve the problems our world is facing, everyone wins. And it might take longer than you anticipate, and take a different path, but if you don’t have that hopeful vision for the future, how are you ever going to get there?

“Transparency is critical but unexpected outcomes help us learn and adjust our approach.” – Alex Hannant, The Yunus Centre, Griffith University

While I’ve verbally stated our goals and written them in private documents, I’m not sure we’ve stated them clearly and publicly online – so here it is.

We want the funding through our platforms to represent the diversity of the countries in which they are based.

This means, for New Zealand, we want:

This is just the start.

I’d like to move our measurement from numbers of campaigns to amounts funded, and branch this out into the project side of our business.

Please hold us accountable to our goals, please support us with your feedback and names of folk you think should crowdfund, but more than anything else – think about how you can publicly state the impact you want to make, and measure it, within your own organisations. If you’re already doing that, share your goals with us – we’d love to signal boost.

In the future, I believe all enterprise will need to be social.

[…] last year, and why 65% of the successful campaigns funded through our platform so far have been led or co-led by women. All we want for Christmas is equitable […]

[…] Why setting (and measuring) impact goals is so important […]

[…] PledgeMe, we’ve set an impact goal for ourselves to have 15% of our equity crowdfunding campaigns led by Māori, Pasifika or Torres […]