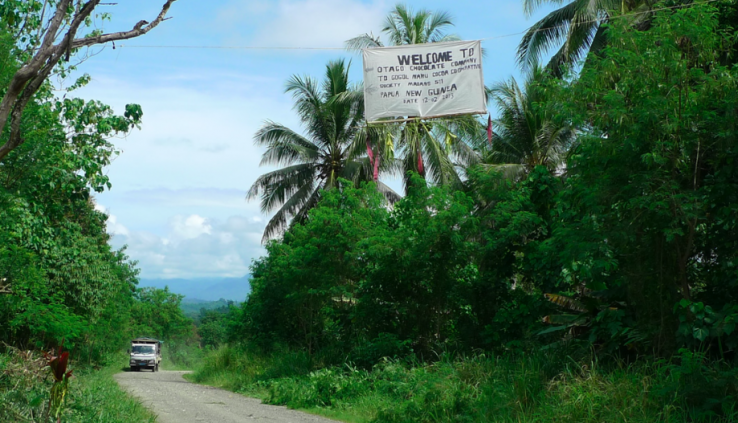 On New Zealand’s beautiful South Island lies a small, historic city of less than 200,000 inhabitants. The serene harbour views and quiet, picturesque laneways of Dunedin belie the sheer force of will of the town’s inhabitants. This is the story of a crowd of people who refused to be at the mercy of a corporate decision and took Dunedin’s chocolate destiny firmly in its own hands (3549 pairs of hands, to be precise).

Since the late 19th century, Dunedin has been a chocolate city. What was believed to be the Southern hemisphere’s first ever chocolate factory  was opened in 1884 by Richard Hudson. Later in 1930, this chocolate making plant was merged with Cadbury, one of the original UK chocolate companies and best-loved brands in the world. Chocolate became part of the city’s culture and many generations of locals earned their living at the factory. Cadbury’s was a good employer and a well-loved and respected business in Dunedin. In 2009, Cadbury’s was taken over by the international confectionery giant Kraft, which is now known as Mondelez International.

In 2017, Mondelez International announced that it would be closing the Dunedin factory. After almost a century of making chocolate in Dunedin, they were moving production elsewhere. For them, it was profitable, but not profitable enough. The decision was a devastating blow to the people of Dunedin, many of whom relied on the factory for their livelihoods. People were angry, and not just in Dunedin. Up and down the country, people refused to ever buy Cadbury products again. The community was outraged that a profitable business could be closed down at the whim of an overseas owner, resulting in many job losses. They showed it by talking to the press and protesting.

It was at this point that three of Dunedin’s city councillors decided to take action. After meeting with employees and the community, they decided to test out whether they could collectively buy the factory and continue Dunedin’s long-standing history with chocolate. The ‘Own the Factory’ campaign was born.

Initially, they wanted to raise $20 million to buy the Cadbury factory itself, a big dream for such a small, but determined, community. Unfortunately, New Zealand’s legislation does not allow more than $2 million to be raised through equity crowdfunding. This called for a change of tactics and the group decided instead to combine forces with local craft chocolate company OCHO. The new aim was to raise the legal maximum of $2 million to buy OCHO as well as invest in new production equipment and fit out a bigger factory space. Ocho had been founded in 2013 by Liz Rowe with the aim of making high quality craft chocolate. She used beans sourced locally from the Pacific Islands (where it’s a huge part of the local culture), paying fair prices for the beans as well as fair wages to staff, and using only two ingredients in the chocolate (cacao beans and sugar).

Confidence in the campaign’s success was high for several reasons. Firstly, more than $5 million had been ‘pre-pledged’ through a grassroots initiative in which people could ‘pledge’ without any real money involved. This was used to gauge the interest of potential investors. These indicative pledges came from all over the world, as the ‘Own the Factory’ campaign had gained international media attention. Secondly, people who bought shares in the crowdfunding campaign were offered a 20 percent discount on chocolate bought from OCHO, and that was a significant temptation for New Zealand chocolate lovers.

Ocho’s equity crowdfunding campaign launched in November 2017, just four months after the  announcement that Cadbury’s was closing. Within 32 hours of launching, the campaign had raised the legal maximum of $2 million and had kept its dream alive. It was the fastest crowdfunding campaign in New Zealand to reach its target at the time, and ensured Dunedin would remain New Zealand’s home of chocolate. OCHO is now owned by more than 3,000 shareholders from Dunedin and right around the country.

Today, Ocho continues to make delicious craft chocolate. OCHO is completely transparent about its chocolate making processes so that people know exactly what’s in the chocolate they’re eating. Its values (stated as a condition in the information memorandum of their crowdfunding campaign) include keeping chocolate-making skills in Dunedin, paying fair wages to staff and fair prices to growers, and ensuring sustainable business practices. Crucially, people are at the centre of its ethos, and profit is secondary. It implemented measures to guarantee this, such as worker-CEO pay ratios within a set multiple. This means that the highest paid employee will never be paid more than a certain amount above the wage of the lowest paid employee. With the people of Dunedin at the centre of its ownership and company constitution, Ocho is by its very nature community-focussed.

There is so much that can be learned from Ocho’s story. It shows that communities and livelihoods don’t have to be at the mercy of corporate decisions and that companies can be driven by people first, and profitability second. But most importantly, it shows what a determined crowd of people can do.

[…] Ocho is an example of one company who did one of these sessions before their equity crowdfunding campaign, which attracted over 3,500 investors. PledgeMe helped with their hugely successful ‘Pre-pledge’ programme, which registered over $5 million in ‘pre-pledges’ (expressions of interest to pledge to the campaign when it launched). Read more about their crowdfunding growth story here.  […]