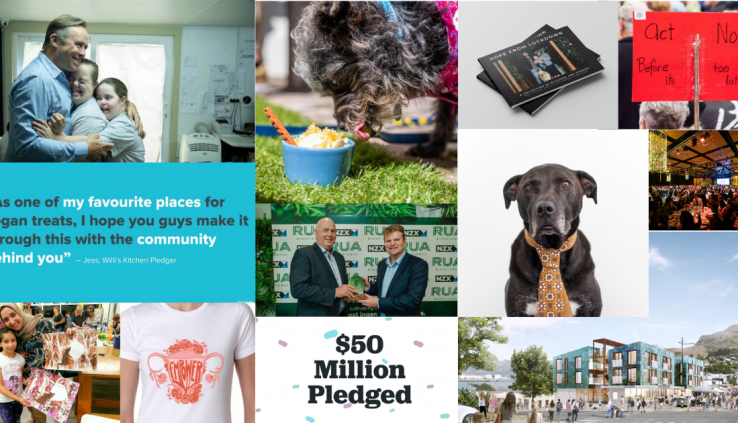 Arguably, most people would agree that 2020 has been a tough year. The toughest, for some of us. Businesses across the world have had to adjust, restructure or shut their doors permanently, the Covid-19 business climate proving to be too much for so many.

Like many other businesses, PledgeMe was also not spared. We tried our best to help other businesses through the crisis by offering additional services and resources (some free and government-subsidised), re-opening the conversation around crowdlending, and just talking openly and honestly about it with our crowd. We also became a fully remote and, sadly, smaller team, sharing our tips for working from home in our blog How to work from home as a team.

Unfortunately, like other companies, we were still hit hard by Covid-19. Campaigners in the pipeline postponed their campaigns indefinitely, campaigns which were published struggled to get momentum and hit their minimum targets and, worst of all for us, we were forced to downsize our team.

However, we’ve recovered significantly in the latter half of this year and we want to celebrate our wins for 2020. Here are our top 10 feel-good crowdfunding moments for the PledgeMe team from 2020, in no particular order.

1) We Coped. Realising Covid-19 Has Nothing on Crowds.

When Covid-19 threatened to close the doors of Willi’s Kitchen, a Vietnamese fusion cafe based in Wellington, the owners decided to reach out to their crowd for help through a project crowdfunding campaign. They needed some cash to tide them through the lockdown when they’d been unable to do business.

After launching, they reached their minimum goal of $3000 in less than a week and were able to save the family business popular with Wellingtonians. We were heartened by all the messages posted by Willi’s Kitchen customers as they pledged, truly showing how much they cared.

Another heartening story was that of Rose Palmer. When the Coronavirus properly hit, Rose found herself stranded in a tiny, snowy town in the middle of Slovakia. She was a couple of months into her European backpacking adventure and suddenly found herself with essentially useless travel insurance, cancelled flights, and a worrying amount of cash (or lack thereof) to her name. In response to her situation, Rose launched her ‘Keep us strong’ project crowdfunding campaign, in which she offered to create ‘Epic Lockdown Fighter’ portraits in exchange for pledges.

Rose raised over $2200 through her PledgeMe campaign, helping to sustain herself and inspire many people along the way too!

Other examples of how crowds rallied to support people, companies and communities during the lockdown.

Hope from Lockdown is a historical collection of photos and stories about Kiwis coping with the lockdown.

Although Mams in Lockdown didn’t hit their crowdfunding target, they still published their book and shared the stories of 77 parents who had given birth or become parents during the lockdown.

Copeisolation is a photographic collection of experiences, humour and art from the tiny community of Stewart Island.

Thank You Static was a project crowdfunding campaign organised and contributed to by the residents of Hamilton.

The campaign raised almost double the minimum target, showing that Hamilton residents have a whole lot of love for Static!

Although the economy is slowly recovering, a lot of people are still using crowdfunding as a way of getting through the hardships Covid-19 brought on, such as Extra Miles for Excite. We’re excited to see their crowd rally around them, too!

Parents viewing student work during the 2020 Art Exhibition of Excite Music and Arts Academy, currently project crowdfunding through PledgeMe at the time of publication.

Downlights had a very difficult start to their equity crowdfunding campaign in the beginning of the year, having the bad luck of launching the day Prime Minister Jacinda Ardern announced that New Zealand would go into lockdown. However, through their hard work and determination, they reached their $150,000 minimum goal. Over the past year, they have thrived. Here’s a list of some of the things they’ve achieved:

Here’s the video they created to thank their crowd:

Downlights also ran a project crowdfunding campaign later in the year which, unfortunately, did not meet its target. If you pledged to that campaign and still want to support them, you can do so here.

We are very proud to have been a part of Downlights’ growth journey. We can’t wait to see where the future takes them!

One of the things we loved about Thank You Payroll’s equity campaign was the prevalence of dogs throughout their information memorandum. They proved that it’s possible to not take yourself too seriously while making a serious share offer that could result in an ROI (and which did for Thank You Payroll pledgers).

On the 20th of August, 2020, we hit the magic $50 million mark of funds raised through the PledgeMe platform. At the time of this milestone, this represented over 130,000 pledges which helped fund over 1400 campaigns for things people care about across Australia and New Zealand.

Pledgers helped fund social enterprises that tackle social and environmental issues using their business practices or profits, such as Ethique or Eat My Lunch. They were members of communities which took ownership of things that directly affected them, like Ocho and the Own the Factory campaign. Activists were enabled to take corporations who are damaging the environment to court, like Aotearoa Water Action.

This magic number also represented helping to fulfil the dreams and aspirations of so many artists, musicians, performers, and change-making entrepreneurs.

It’s amazing what crowds can do!

In October, two-time PledgeMe alumna Ethique landed a major international investment deal which would see its pledgers seeing returns “many, many times bigger” than what they originally pledged. The 2015 pledgers, in particular, would have “one of the world’s most successful exits” as shareholders.

We can’t wait to see future wins like this for other PledgeMe alumni and to see their crowds being rewarded for investing in the growth of social enterprises and companies trying to make a positive difference.

In October, RUA Bioscience (formerly Waiapu Investments / Hikurangi Cannabis Company) became the first Māori-led company and second medicinal cannabis company to be listed on the NZX. When Waiapu investments launched their equity crowdfunding campaign on PledgeMe back in 2018, they hit their $2 million goal within 10 minutes after going live to the public.

Two members of the original leadership team of Hikurangi Cannabis Company, Irene López-Ubiria and Álvaro Vidiella-Salaberry, are currently equity crowdfunding again at the time of this blog post. Their medicinal cannabis company, Phytotecnia, has raised almost $300,000 above their minimum target!

The concept of Collett’s Corner all revolves around solving the problem of wealth disparity in property ownership. Instead of being owned by a handful of wealthy individuals, Founder Camia Young has a vision that commercial property can be co-owned by many regular members of the community.

Inequality comes in all shapes and sizes and one of the less obvious kinds is period poverty. This amounts to people who menstruate being unable to access menstrual hygiene products because of financial circumstances. In New Zealand, one study found that 12.5% of surveyees had missed out on using menstrual products because of the cost, and at least 7% had skipped school as a result.

The Good Fund decided to do something about it and launched the 100,000 Periods Project. This project was a replacement for the team’s usual annual fundraiser, which had been affected as a result of Covid-19.

‘Empower’ Tshirt, one of the rewards offered on The Good Fund’s crowdfunding campaign.

A total of 1046 pledges were made to The Good Fund’s project campaign to help end period poverty. They raised a whopping $41,600 to help people access quality, sustainable period products right across New Zealand!

9) Helping Fund Both a Cat and Dog Cafe

We’re all animal lovers at PledgeMe, so we were over the moon to have been part of the journey of Purr and Beanz (a cat cafe based in Auckland formerly called Barista Cats Cafe) and, more recently, The Barkery in Christchurch.

Purr & Beans completed their crowdfunding campaign to move to a new location back in May. The cafe is home to 13 rescue cats and has an adoption room where foster cats and kittens can be adopted into forever-homes. Below is one of the Purr & Beans residents, Bryan.

The Barkery, New Zealand’s first adoptable dog cafe, recently closed their project crowdfunding campaign too, raising over $54,000 to make the cafe a reality.

Founders Jack and Ally were ‘barking mad’ about the low dog adoption rates in New Zealand, which is why they decided to found this pooch lover’s paradise. The campaign was also featured in a lot of media, including this Stuff article. We can’t wait to visit The Barkery and see those adoption rates go up!

Despite sadly having to downsize the team this year, we also have had some team changes and additions which have been great for PledgeMe!

In February, our new CEO, Dr Claire McGowan, joined us. This was arguably one of the toughest years to lead a business, never mind as a leader new to the role! She’s done an amazing job and we can’t wait to see what she has in store for PledgeMe in the new year and beyond.

If you’ve been following PledgeMe for longer than a year, you may have noticed that our Education Guide, social media graphics, and newsletters have gotten a serious upgrade. That’s all thanks to our Chief Design Whiz, Morgahna, who also joined us at the start of the year.

Our 2020 Reflection: Crowds Can Overcome

Want to see how things stood this time last year? Read our Top 10 crowdfunding moments of 2019.

[…] core business in New Zealand going through the turbulent year that was 2020, even ending it with several key highlights (including investor returns for two PledgeMe equity […]