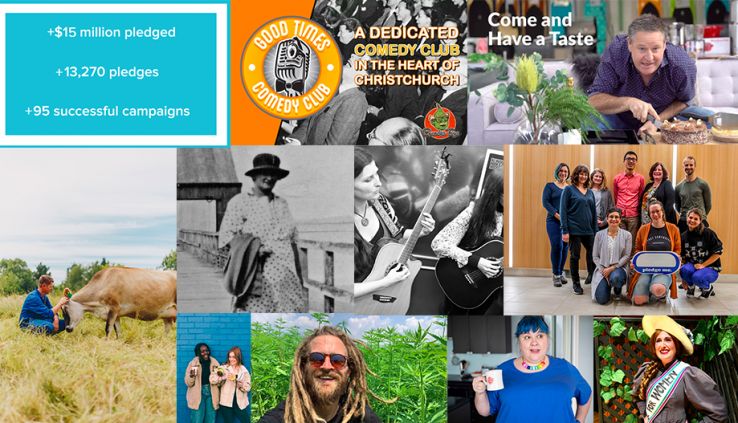 Being in the midst of our biggest fiscal year so far, it’s fair to say that Christmas has come early for PledgeMe this year. Over 95 campaigners funded the things they care about thanks to over 13,000 pledgers who care about what they do. More than $15 million has been pledged, empowering impact-focussed businesses, organisations and entrepreneurs to keep making positive changes in their industries, in society, and for the environment.

These numbers represent many small victories throughout the year, as well as special moments where communities came together and made change happen. 2019 has been a year full of great crowdfunding feel-good moments, and we wanted to share our top ten with you!

November was a big month for us. It was in fact our biggest month ever; a whopping $4.2 million was pledged through our platform! Medicinal cannabis company Puro broke the record for the highest amount of investment raised in New Zealand and Australian public equity crowdfunding history with their $4 million raise. It was simply smashing!

2) Our biggest project campaign yet: a refuge for pets from domestically abusive homes

In May, 2170 people pledged more than $300,000 towards Pet Refuge New Zealand, a refuge for pets coming from abusive homes. With such a huge crowd of people dedicated to the safety of our furry friends, this was definitely one of the most heartwarming crowdfunding moments of 2019.

3) The crowd that created a mooovement

In April last year, Glen Herud reluctantly announced that he would be closing Happy Cow Milk, a company which focussed on ethical, more environmentally sustainable dairy farming. The customers of Happy Cow Milk refused to accept it. They supported him emotionally and financially while he reinvented the concept to become more scalable and profitable. They convinced him to crowdfund his new technology, and they invested in it to the tune of $400,000 within 8 hours after launching publicly.

4) Witnessing a live performance from The Dragonfly Rustlers

In May, The Dragonfly Rustlers crowdfunded their new EP. One of the pledge rewards was a live performance, which our Chief Bubble Blower Anna simply couldn’t keep all to herself! You can watch it here.

What’s better than a conference? An unconference of course! The basic concept of unconferencing is that the event attendees set the agenda together instead of simply attending a range of talks they were not consulted on. As a community-driven platform, it makes sense to us that the crowd attending provides input. We also hosted our Crowd Round Unconference here in Queensland in June 2019 and supported two more (the Social Enterprise Unconference in Aug 2019 and the Yeppoon Innovation Unconference in Nov 2019). All up, there were over 250 attendees and it was a unique way for us to activate different crowds of people.

Our 2019 Social Enterprise Unconference was a hit, and we look forward to organising more…watch this space!

In July this year, PledgeMe hosted Parrotdog in Brisbane at a brewers event. They explained how they raised $2 million in two days during their 2016 equity crowdfunding campaign. Admittance to the event was purchased by either a ticket or with beer.

PledgeMe was honoured to be the delivery partner for Wellington City Council’s Zero Carbon Challenge, a program which supports early stage ideas, projects, or businesses which are approaching their next level of growth and which have a focus on lowering carbon emissions. Some of the campaigns that were a result of this program were Froth Tech, Growspace and Reusabowl.

8) Becoming a beekeeper (and other wacky and wonderful rewards)

We know that you’re paying for it, but some of the rewards on PledgeMe projects are simply priceless. From personal live band performances to becoming a beekeeper for half a day, we’ve seen it all. How about buying someone’s surname or a lap dance? Check out even more quirky past rewards here.

Campaigners have several approaches to pitching their campaigns, and their pitch videos are the creme de la creme of their creative juices. Some have a simple yet effective portrait-shot video like Angel Food, some prefer a more classically shot style like upcoming campaigner Lagau Malu Aidal, and others prefer a more humorous approach, like Yeastie Boys. Oh, and here’s Ben from Container Door throwing a BBQ into a pool for his pitch video:

He Tāngata, He Tāngata, He Tāngata is Māori for The People, The People, The People. To fully understand this whakatauki, read this article. At PledgeMe, our motto is to help people fund the things they care about. We care about people, their connections to others past, present and future (whakapapa) and to those around them. Diversity of people is an important part of that and is built into our ethos. That’s why we partnered with Māori Women’s Development to create Tā Koha to empower indigenous founders last year, and why 65% of the successful campaigns funded through our platform so far have been led or co-led by women. All we want for Christmas is equitable opportunity!

As we said, it’s been a fantastic year at PledgeMe and none of it is possible without you, our wonderful crowd!